More than 150 years ago, before the urbanisation of the Principality, ninety percent of its land, which in those days included Roquebrune and Menton, was used for agricultural development and farmers were taxed on citrus produce. When the railway link connecting Monaco to France began service, five years after SBM opened the Monte Carlo Casino in 1863, tourism quickly replaced the agriculture economy as visitors, either looking for Lady Luck at the world famous casino or wanting to take a gander at how one percent of the other half live, descended in steady numbers on the principality.

Although today’s Monaco is described as “100 percent urban”, it still has a trace of those agricultural roots, with its 600 bitter orange trees, which you’ll find along avenue Grande-Bretagne, and boulevards Suisse, Italie and Moulins. A detail not overlooked by resident Philip Culazzo. “I trade foodstuffs,” Mr Culazzo, who’s lived in the Principality for seven years, tells Monaco Life, “and I understand quality control. Monaco’s orange trees are organic, they are not treated with pesticides, but they are too bitter to eat, so charitable organisations cannot use them. It’s a shame that they are wasted.” Mr Culazzo, a Dubliner with French and Italian heritage, was also aware that while Monaco offers a great deal in terms of sightseeing and culture, and visiting family and friends, there was no locally-made product that tourists could buy as a memento or that residents could offer to their guests. Two years ago, Mr Culazzo contacted the government to inquire whether he could experiment with some of the bitter oranges. He bought distilling and fermentation equipment and started testing. When he presented the results to the administration, they were on board. He founded l’Orangerie in 2015. “I love wines and spirits, and often visit vineyards on holidays,” he told Monaco Life from his recently opened shop at 9 rue de la Turbie, near Place des Armes. “I’m not an oenologist, I’m not a scientist, so I’m learning about the chemical process of transforming oranges into a digestif that tastes this good.” Four ingredients make up l’Orangerie: Monaco bitter oranges, a small amount of sugar, water and alcohol. Similar to limoncello, the alcohol content is 30 percent. Last year, 15,000 tonnes of oranges produced 50,000 bottles. “There are no added colours or chemicals, the drink is 100 percent natural,” Mr Culazzo explains. A framed letter in French on the wall behind him expresses appreciation for the bottle of l’Orangerie, the first ever produced, from HSH Prince Albert. “You may find some deposits at the bottom of the bottle, but this follows the trend of organic wines also.” The orange liqueur is produced entirely on site, from the manual peeling to production. During the two-month harvest, which started the first week of January, a month earlier than usual due to the warmer weather, Monaco’s garden services deliver crates of Monaco’s finest (and only) citrus directly to rue de la Turbie. The fragrance of the oranges cannot be contained within the atelier. Secretary of State at the Palace, Jacques Boisson, and his wife, returning to the Rock after lunch, are intrigued by the aroma and the colourful window front so decide to pop in. They’re offered a degustation of the orange liqueur by Mr Culazzo. The Boissons, a delightful couple who lived for many years in New York and also Paris, are instant fans of the drink – “very fragrant, ideal as an apéro with friends” – and purchase a bottle, which sells for €25. “My goal is to sell 50,000 bottles a year,” says Mr Culazzo. “The idea is Monaco first and foremost, and I hope people will have a bottle in their homes to offer visitors.” The eye-catching bottle, which reflects glamour of the thirties, uses a textured paper like an orange peel. L’Orangerie has permission to sell bottles directly from the atelier, but it’s also available to buy at the Wine Palace and Mr Room Service. Otherwise, restaurants, beach clubs, bars and nightclubs in Monaco are beginning to stock it. Already the orange-flavoured liqueur has inspired several cocktails: The Monaco Spritz (orange liqueur, Prosecco, ice and zest), The Rocher (with gin) and the rose-syrup La Gracieuse, and surely more will follow. Article first published February 16, 2017. 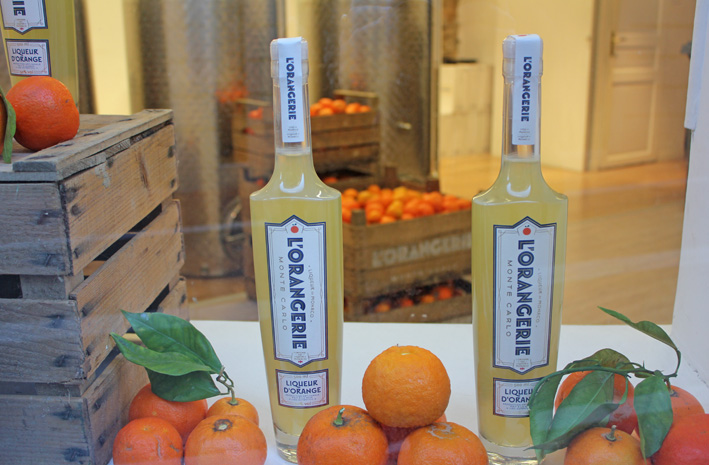