A consistent, but often unspectacular, season from Ferrari driver Charles Leclerc earnt him seventh place in this year’s drivers’ standings. Monaco Life looks back at the Monegasque drivers’ season and what it means for next year.

The season ended disappointingly for Leclerc. The Ferrari driver went into the final race weekend looking to consolidate his fifth place in the drivers’ standings, but an error in strategy by the Ferrari team saw Leclerc only pick up one point. His team-mate Carlos Sainz, who finished on the podium, and Lando Norris, therefore both leap-frogged Leclerc.

Although not the most glamorous prize, fifth in the drivers’ standings would have represented a stellar season for Leclerc, an ample reward for his consistency across the season. The Ferrari was nowhere near the pace of the Mercedes nor the Red Bull all season, but Leclerc, more often than not, was best-of-the-rest, scoring 12 top six finishes over the course of the 22-race season.

For large parts of the season, Leclerc slipped under the radar, pumping out impressive finishes without stealing the limelight, often even without having to overtake. His strong race in Mexico was testament to this. Although a lonely race for the Monegasque driver, his superior pace relative to his other mid-field challengers kept him out of the clutches of his rivals on his way to sealing a well-earned fourth place.

His highlight of the year undoubtedly came at the British Grand Prix with his impressive second place finish, however tinged with disappointment at what could have been.

Having led the vast majority of the race after a lap one incident between Max Verstappen and Lewis Hamilton, the latter overtook Leclerc with just two laps to go. This was, however, to be his only podium of the season, with his slightly more erratic team-mate Sainz out-performing him in this regard, scoring an impressive four podiums.

One of those podiums came at Leclerc’s home grand prix in Monaco – undoubtedly the Monegasque driver’s lowest point of the season. His supreme knowledge of his local streets propelled him to pole position, but a crash during his second flying-lap left his car in a state of disrepair.

Despite the best efforts of the Ferrari mechanics, the car could not be readied in time for Sunday’s race, as Leclerc broke down on his way to the grid. Having been set for the all-important pole position, at a track where it is notoriously difficult to overtake, Leclerc instead had to watch on from the pits, as his team-mate took an impressive second place.

Although an individual error was pivotal for Leclerc in Monaco, at other times team errors cost him vital points. During the late deluge of rain in Russia, Leclerc was running as high as third at one point, but as others pitted for intermediate tyres, Leclerc, by order of his team, stayed out on the slicks. This was ultimately the wrong call. The monegasque left Sochi pointless, when only a matter of laps earlier, before the confusion and chaos that the rain brought with it, he looked a podium-contender.

Leclerc’s aspirations of a fifth-place championship were put to rest in the final race of the season, once again the result of an ill-conceived tactical call. Having pitted during a virtual safety car, Leclerc found himself languishing in the lower-midfield, and crucially outside of the points. This was ultimately a mistake, and his failure to pick his way through the mid-field in Abu Dhabi meant that he only secured the solitary point. Strong points finishes for his team-mate and Norris ultimately, cruelly, deprived Leclerc of his fifth place standing at the final hurdle.

Sainz, who was in his maiden season at Ferrari, surpassed expectations. Brought in to be a more traditional number two driver, few could have foreseen him out-performing his Monegasque teammate. Leclerc, however, doesn’t feel threatened by Sainz’s success, instead perceiving their dynamic as mutually beneficial. Following the Abu Dhabi Grand Prix, Leclerc stated, “I think we have learned a lot from each other. Always when you have a new teammate, you need to see their way of working, their talent, their driving and their way of approaching a race weekend.”

Leclerc believes that Sainz’s arrival has also improved him as a driver, revealing publicly, “He has put pressure on me to be quicker… I think one of his (Sainz) strong points is tyre management. This was my weakness in 2019, I improved a lot in 2020, and thanks to Carlos, I have done so once again this year.”

Indeed, Sainz’s surprising amount of pace relative to his teammate, and his ability to conserve his tyres, raises the prospect of a scintillating intra-team, potentially title-challenging battle next year. The 2022 season sees the introduction of a number of rule changes that will herald a new era of F1 cars. Primed to benefit from these changes are Ferrari, who are touted to have a title-challenging car from next season. Ferrari team principal Mattia Binotto certainly believes this to be the case, as proven by a post-race radio message to Leclerc, which is sure to whet the appetite of Leclerc fans, Ferrari fans, and F1 fans globally: “We’re going to have fun next year!” 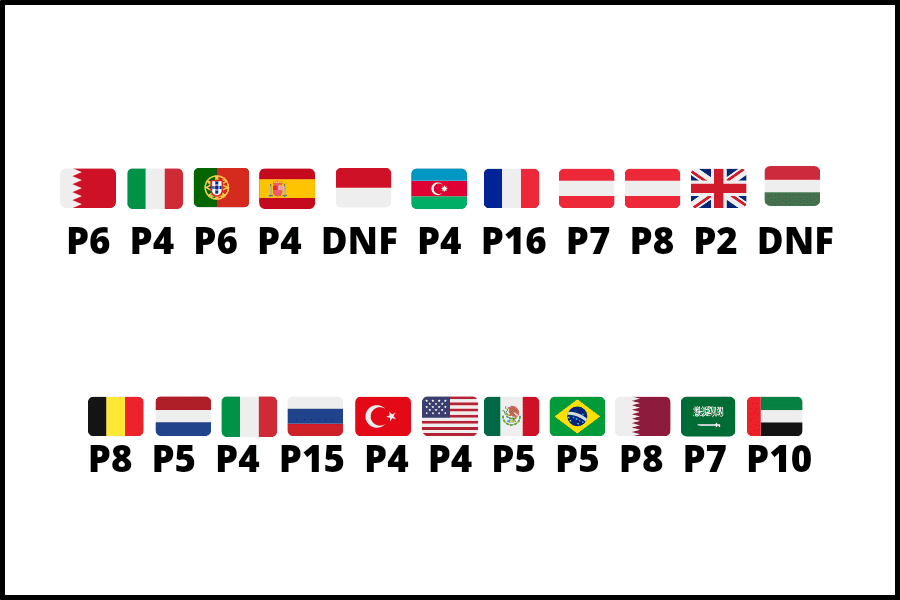