Having fallen to an on-the-buzzer defeat to Lyon in their previous match, AS Monaco basketball once again faded away in the final quarter, as Turkish side Fenerbahce ran out 96-86 winners.

Bar the final quarter, Thursday night’s match in Istanbul was a close affair, with neither side able to build a lead at any point. The Roca side’s recent poor run of form now sees them cut-off from the play-off places, and languishing in a lower/mid table position.

Both sides started the fixture defensively strong, not only closing down the space on the arc, but also defending aggressively inside the key. Mike James jinked back to convert a three-pointer to give Monaco a narrow lead (16-18) at the end of the first quarter.

There was even less separating the sides in the second quarter. Fenerbahce started the quarter strongly, some fizzed passes allowing three-point opportunities, and with an impressive conversion rate of nearly 60% over the course of the evening, it allowed the Turkish side to construct a narrow lead.

However, similarly to the first-quarter, the imperious James, who registered a mammoth 31 points on the night, once again had the last laugh. Having dribbled past two markers, he found himself on the three-point line, under great pressure and with the final seconds ticking-away, but despite all of that he dispatched a three-pointer to put Monaco into the lead going into half-time. 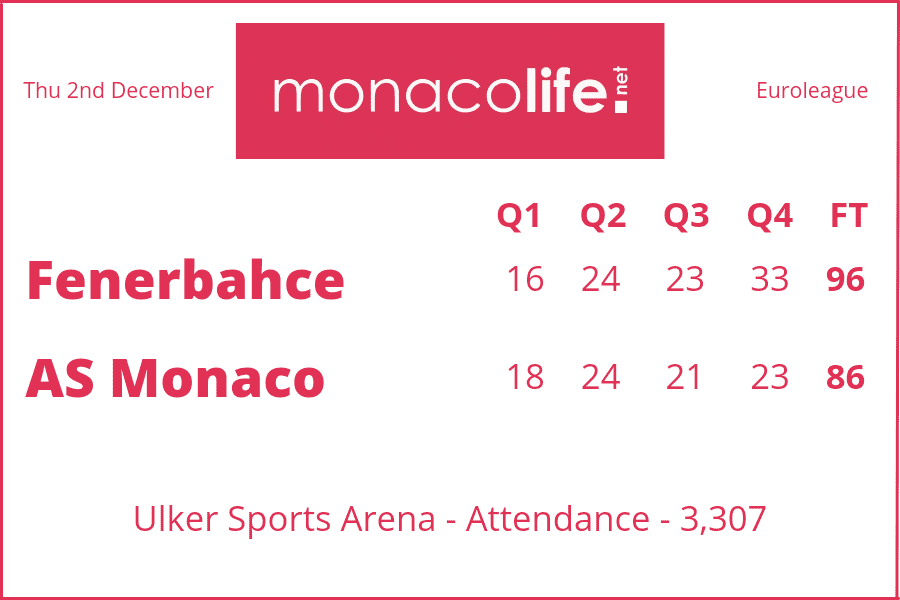 Fenerbahce quickly set about overcoming their meagre deficit, and did so through a precise Marko Gudurić three-pointer. The Turkish side, despite establishing a narrow lead, didn’t run away with it; Yakuba Ouattara in particular shone in the third-quarter to limit the damage, which allowed Monaco to go into the final-quarter level.

A tight-game surprisingly gave way to a one-way affair in the final quarter, as the Roca side, as they did against Lyon in their last fixture, capitulated. Despite the best efforts of James, who continued to impress with his direct running, long-range three-pointers and key pass distribution, Fenerbahce overpowered Monaco, and romped out 96-86 winners. But the scoreline was not necessarily reflective of what was, for the most part, an incredibly tight game.

Mitrovic’s men will have to quickly get over the defeat, as they have an extremely tight turnaround to prepare for Saturday’s match against Châlons-Reims at the Salle Gaston Médecin.