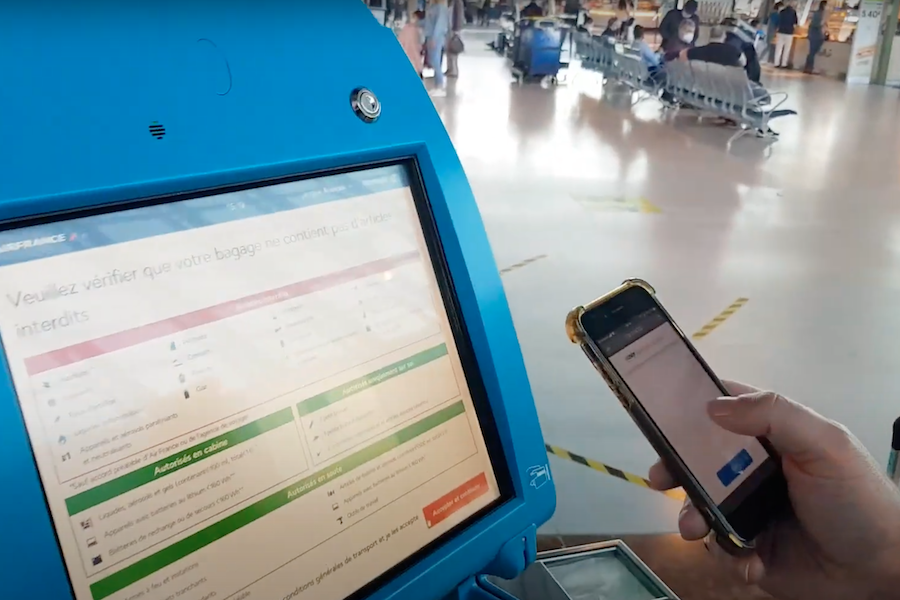 Nice Côte d’Azur airport is doing its part to prevent the spread of Covid and other viruses by introducing new contactless registration machines on a trial basis for two months starting in December.

As the pandemic drags its heels and with the holiday season upon us, special precautions are being taken nearly everywhere to ensure the public is as safe and healthy as possible. One of these precautions, which was heavily cited in the early days, but much less so now, is the need to keep surfaces clean and virus-free to prevent infection.

Nice Côte d’Azur airport has taken this aspect into consideration and, starting Monday 6th December, will be testing a new touchless check in system for two months to allow travellers more peace of mind on their journeys.

The system came about as a collaboration between the airport’s technical and IT departments along with those of its partner EASIER and allow passengers to check in using their smartphones.

The technology is quite familiar to most people by now. By scanning a QR code displayed on the screen, the traveller can control the terminal remotely. The passenger then inputs all the relevant information, such as airline company, flight number and security procedures, on their phone. The machine then prints out a boarding pass and luggage labels without the traveller ever having to lay a finger on the screen.

The airport says security issues have been eliminated through the system’s ability to lock onto the specific user’s smartphone via the QR code connection. This means only a single user can operate that terminal at one time. If the passenger does not interact for 20 seconds, or moves too far from the machine without completing the operation, it cancels the transaction and goes back to the start. This eliminates the possibility of another passenger taking control of a process already in progress.

Though well-received by all the carriers, only Air France and Air Corsica will be offering the service during the test phase.

“Improving the filtration of the air within our terminals, putting in place all the conditions so that the barrier gestures are respected and maintaining our continuous surface disinfection operations find with this solution an additional means of limiting the risk of the propagation of virus,” said Franck Goldnadel, President of the Management Board of the Airports of the Côte d’Azur. “We are convinced that health security will remain a major issue for air transport in the future and we intend to implement everything that could act on the confidence of travellers, ground or flight personnel, and all those who work on our platform.”

Nice is far from alone on the digital tarmac. Several airports around the globe have been testing and using similar systems. The Norwegians have made all 44 state-owned airports touchless from end-to-end. Several airports in the USA, Australia, Germany, the UK and United Arab Emirates are some of the other countries incorporating new tech to make travel safer.