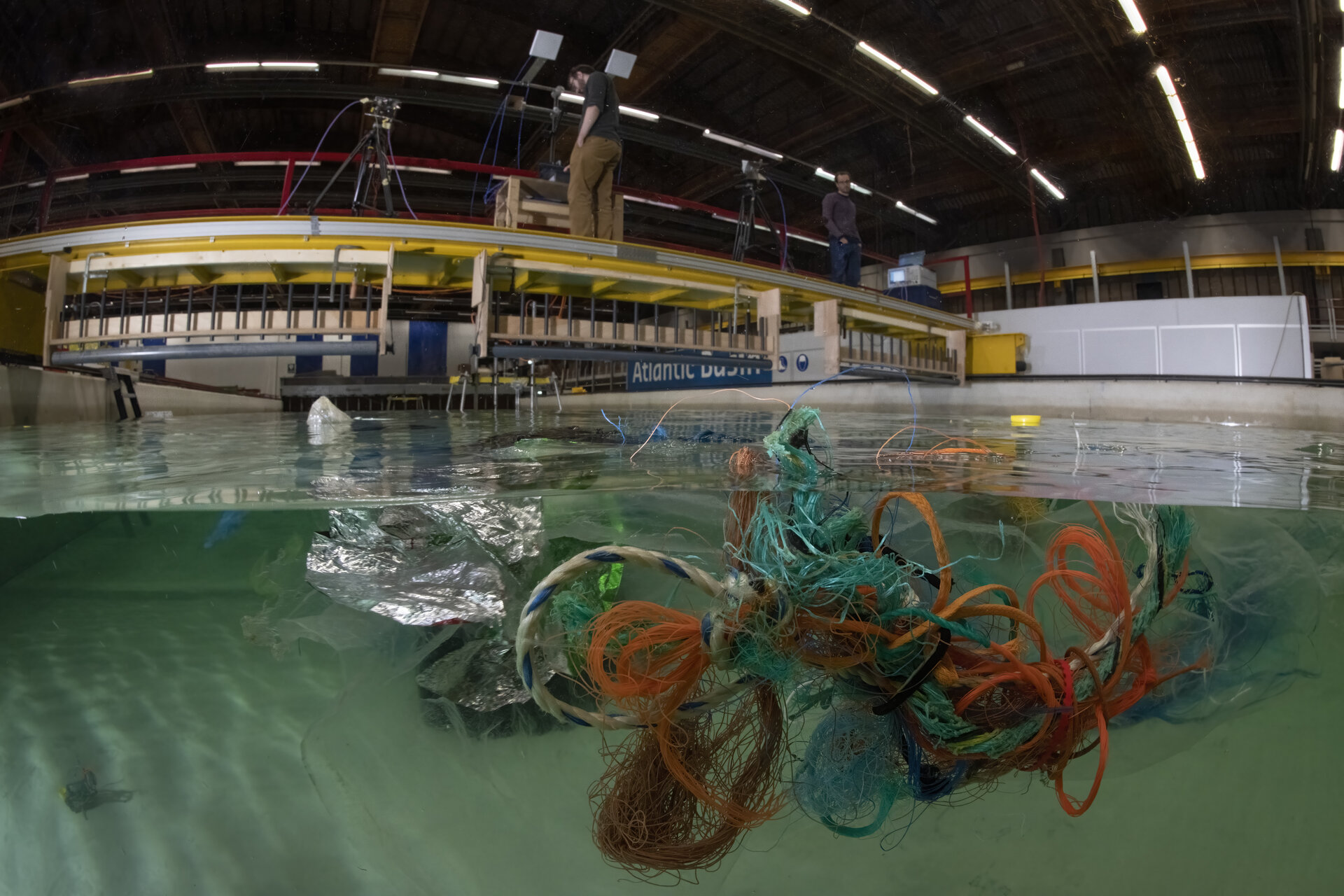 Marine plastic litter was dumped into a realistic scale model of the Atlantic Ocean to test if space technologies would be able to detect it from orbit.

The best estimate is that an average 10 million tons of plastic enter the ocean annually – equivalent to a fresh truckload of plastic dumped every minute – but researchers only know what happens to about 1% of it. Satellite monitoring might in future help track its extent, and see where it goes – if it can be proven to work in practice.

“To start with, can we detect floating plastics with space-based monitoring at all? And if so, which techniques show the most promise, at what frequency and with what sensitivity? Up until now researchers have had general gut feelings about what might work the best, but we are working to remove any guesswork.”

The test campaign took place at the Deltares research institute near Delft in the Netherlands, inside its mammoth Atlantic Basin Facility.

Anton de Fockert, flow expert from Deltares, explains: “This one of a kind 650 sq. m. facility is equipped with wave generators to create realistic deep water waves which can be found in the ocean.”

Anton de Fockert adds: “The plastic used in the basin included material previously recovered from the sea through cleanup campaigns by Stichting de Noordzee and Schone Rivieren as well as ‘fresh’ samples.”

For maximum realism, the plastic placed into the basin took the form of popular items found at sea, such as bags, bottles, marine nets and ropes, cutlery and Styrofoam balls. Additional non-plastic items were also added – to better mimic actual distribution found at sea – including cigarette ends.

“This first test campaign lasted for two weeks, plus an initial week for setup,” says Peter. “We started simple with a lot of floating plastic and no waves, moving to reducing the overall plastic amount as we began with gentle waves, then made them progressively bigger.”

Monitoring from above the facility were the participating teams, plus their specialist instrumentation, intended to simulate observations from space.

Teams from the Institute for Telecommunications in Portugal and the University of Stirling in Scotland employed radar remote sensing. Spain’s Polytechnic University of Catalonia made use of ‘GNSS reflectometry’, which relies on reflected signals from navigation satellites. A group from the University of Oldenburg in Germany deployed optical instrumentation.

Meanwhile a combined team from the University of Alberta in Canada and Technical University Delft in the Netherlands performed fundamental physic analyses – including attempting to better quantify the wave-damping effect of marine plastic litter, which might be harnessed to estimate plastic concentrations in the future.

“We’re now processing our data,” explains Peter. “The initial results look promising, meaning that under certain circumstances the teams did receive useable signals, but there is a lot of analysis still to be performed. We aim to use the time between this test campaign and the follow-up, due to take place early next year, to identify gaps in knowledge that need further focus.”

This project is part of a larger OSIP campaign on marine plastic litter, supported through ESA’s Discovery and Preparation programme, underseeing basic research that lays the ground for future Agency missions.