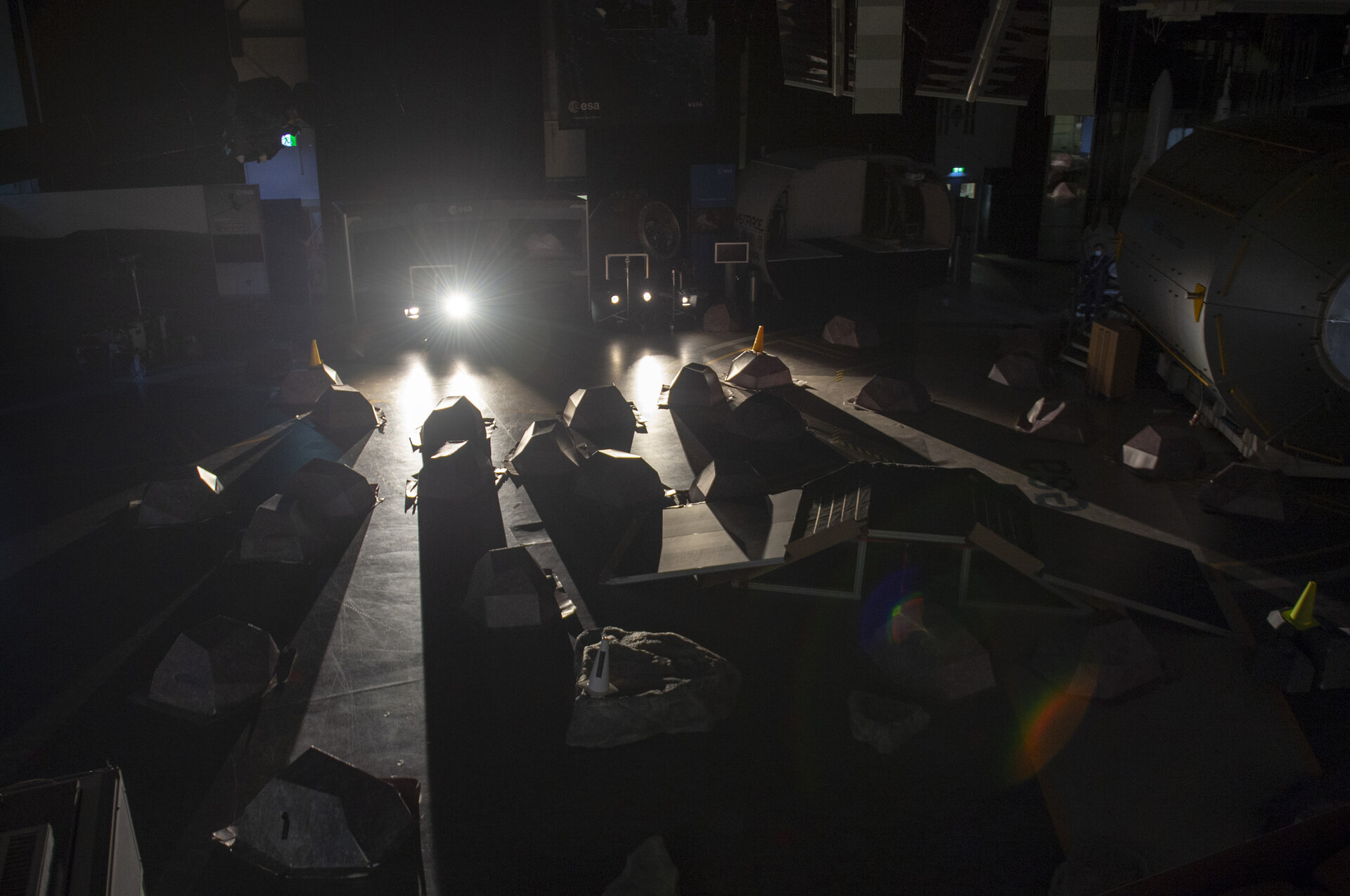 A Sun barely peeking over a cratered horizon, casting long shadows across a rocky moonscape: ESA’s Erasmus Innovation Centre was transformed into an analogue of the Moon’s polar regions, in a dress rehearsal for an international rover competition.

The Space Resources Challenge – supported by ESA and the European Space Resources Innovation Centre (ESRIC) in Luxembourg- is asking European (and Canadian) researchers and institutions to develop and demonstrate a system of one or more vehicles capable of prospecting resources on the Moon in the near future.

Some 13 teams have been selected to participate in the Challenge’s first field test in November, with €375 000 in ESA contracts to be awarded to the five winners, with a larger prize pool on offer after a follow-on field test next year.

“The focus here is really on prospecting – pinpointing promising resources within a difficult lunar environment then characterising them in as much detail as possible, such as through spectral analysis,” comments Massimo Sabbatini, managing the Erasmus Centre, part of ESA’s ESTEC technical centre in the Netherlands.

“We’re preparing for the first rover field test in November, which will take place in a larger location, still to be disclosed, but first we decided to try out the challenge for ourselves first, here at Erasmus. We made use of an existing rover supplied by ESA’s Planetary Robotics Laboratory to try out the tasks we have planned for the Challenge, to make sure they are not too hard, or too easy. We also need to fine-tune the level of latency to be simulated – the signal delay to and from the Moon.”

The lunar poles are a focus of interest for future exploration. They do not experience the crippling temperature extremes of the Moon’s two-week days and nights, and frozen water and other deposits are believed to be buried within permanently shadowed polar craters.

For the Space Resources Challenge, teams must contend with challenging illumination conditions and potential loss of signal events to locate resources in context, including mapping a small impact crater in the vicinity of the rover’s lander – all within two and a half hour time limit.

The remote-controlled rovers must make their way through an initial ‘traverse zone’ into the ‘region of interest’ where the resources have to be found and analysed.

November’s field test will be followed by an ESIRIC-hosted event in Luxembourg next year.

Come join our virtual ESA Open Day on Sunday 3 October from 1300 CEST (1200 BST). It’s your chance to touch base with space, talking with space engineers and experts and getting close-up views of space hardware in a suite of virtual rooms. There is also an in-person visit of ESTEC taking place the day before, open to people with disabilities. To join you have to register, more information here.