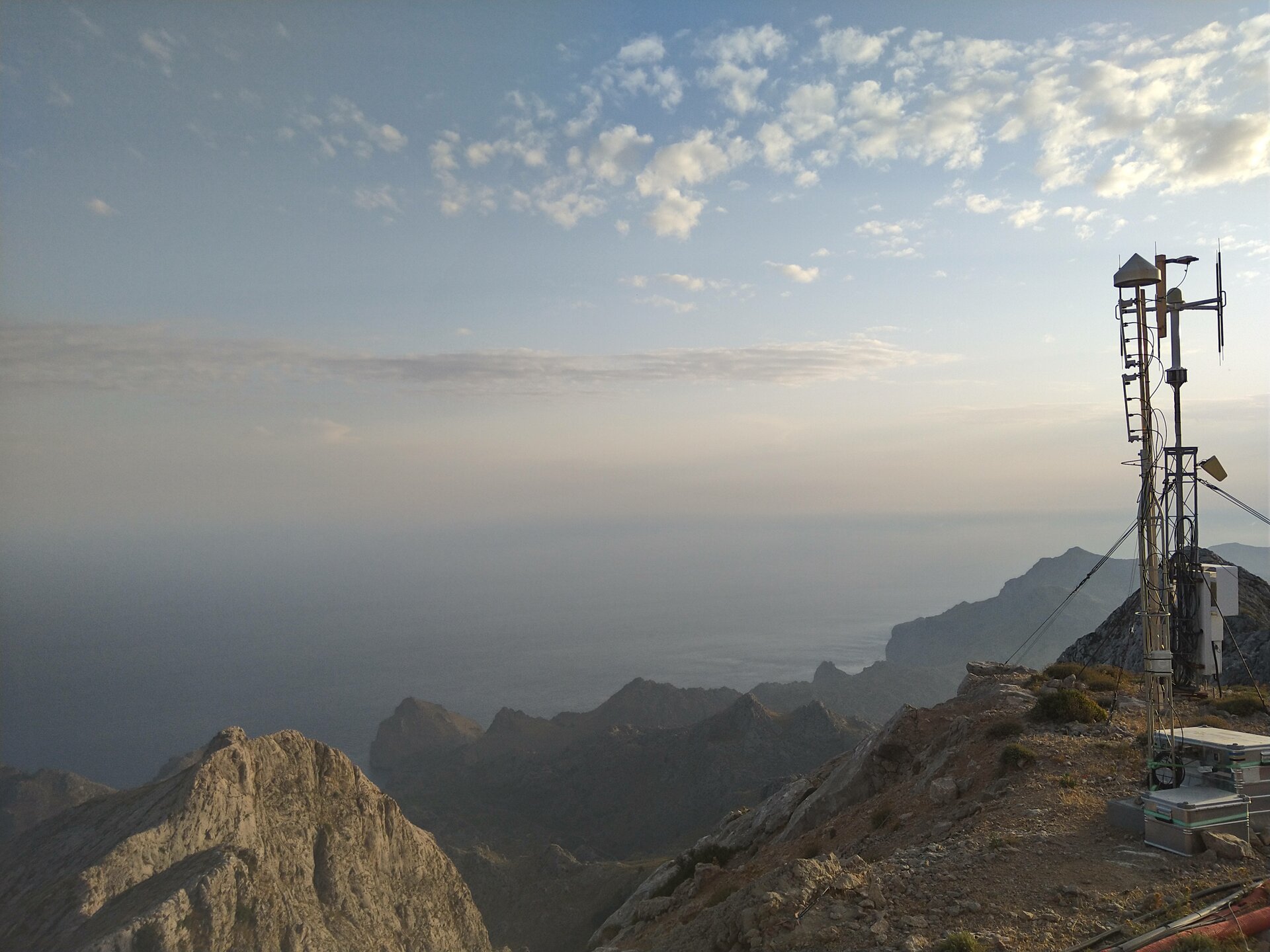 An experimental satellite navigation receiver station high atop Spain’s Mallorca island has opened up a novel view of the ever-changing face of the sea. By picking up satnav signals from the far horizon as they bounce off ocean waves, the receivers are able to measure sea surface height down to a scale of centimetres.

“We set up a pair of satnav receivers in a near-horizontal orientation, 1400 m above sea level atop Mallorca’s highest peak, 4 km from the coast,” comments Estel Cardellach of the Institute for Space Studies of Catalonia.

“Our aim was to receive signals from Galileo, GPS and other Global Navigation Satellite Systems (GNSS) in a way that isn’t possible using standard commercial receivers. We pick up satnav signals that have reflected off the sea surface at very slanted, nearly horizontal geometries, then use these results to derive sea surface height and shape.”

“The basic idea behind GNSS ‘reflectometry’ is not new,” explains ESA microwave engineer Manuel Martín-Neira, who first devised the technique in the early 1990s.

The concept grew out of the well-established practice of radar altimetry, where radar pulses get bounced down from satellites in orbit to measure the precise contours of Earth’s surface. The Copernicus Sentinel-3 pair are the latest contributors to a global altimetry dataset that extends back three decades.

Manuel had the idea that the satnav signals continuously raining down on Earth from multiple GNSS satellite constellations could be made use of in a comparable manner: comparing original and reflected satnav signals could yield altitude along with additional environmental information. Since then multiple space missions have proven the method.

“Why do this? Because while a vertical geometry gives a very rough sea surface, at shallow geometries the sea appears more like a mirror – think of the way Venetian blinds can seem variously open or closed depending on how you look at them. This surface smoothness means the reflected signals remain more coherent in turn, potentially allowing us to obtain much higher precision distance measurements.”

This approach is borrowed from a traditional satnav method to boost precision: instead of processing the pseudo-random codes embedded in satnav signals, so-called ‘carrier phase’ processing utilises the much higher-frequency satnav signals themselves, potentially increasing the resulting accuracy from a scale of several metres down to centimetres – although in practice atmospheric effects still need accounting for.

Estel says: “Our test campaign was supported through ESA’s Open Space Innovation Platform to help prepare for a new small reflectometry mission called PRETTY (Passive REflecTomeTry and dosimetry), which will use the same slant geometry in orbit. This miniature ESA CubeSat is being developed by RUAG in Austria and the University of Graz.”

Results from the reflectometry testing will be checked against Sentinel-3 altimetry data of the offshore test areas, along with an oceanographic buoy deployed specially to provide ‘ground-truth’ results.

The receiver station was set up within the military zone of the 7th Aerial Surveillance Squadron of the Spanish Air Force, who also provided electrical power and logistical support.

“Our test campaign is now over, having run from April to July,” adds Estel. “The main reason we aren’t observing for longer still is simply the sheer amount of raw data gathered by our receivers: 320 MB per second, adding up to more than a terabyte per hour. While our preliminary indications look promising, it is still going to take several months for us to properly process this gargantuan dataset.”

The testing has already had one significant outcome, explains Manuel: “The main goal of this campaign was to test out how to process data from the PRETTY mission. As we did so, using dual satnav frequencies, we realised the longer-wavelength L5 gives increased coherence compared to L1. So we have proposed switching the working frequency of the single-frequency PRETTY from L1 to L5. Such a change, subject to final technical approval, should greatly enhance the mission’s performance.”

PRETTY is scheduled to launch in the second half of 2022.

“As with all ESA’s main GNSS scientific test campaigns, ESA will archive this precious data at the GNSS Science Support Centre based at ESAC in Spain, a facility of ESA’s Navigation Science Office,” comments Javier Ventura-Traveset, Head of the Office. This will enable long-term dataset preservation in support of future GNSS reflectometry missions.”

Leopold Summerer, heading ESA’s Advanced Concepts and Studies Office adds: “This project is a good example of OSIP’s core concept: that we receive good ideas from smart people outside ESA, then take rapid action. In this case the idea for the experiment was submitted last year, was quickly matured and judged excellent, then implemented in record time – in the service of one of our future missions.”