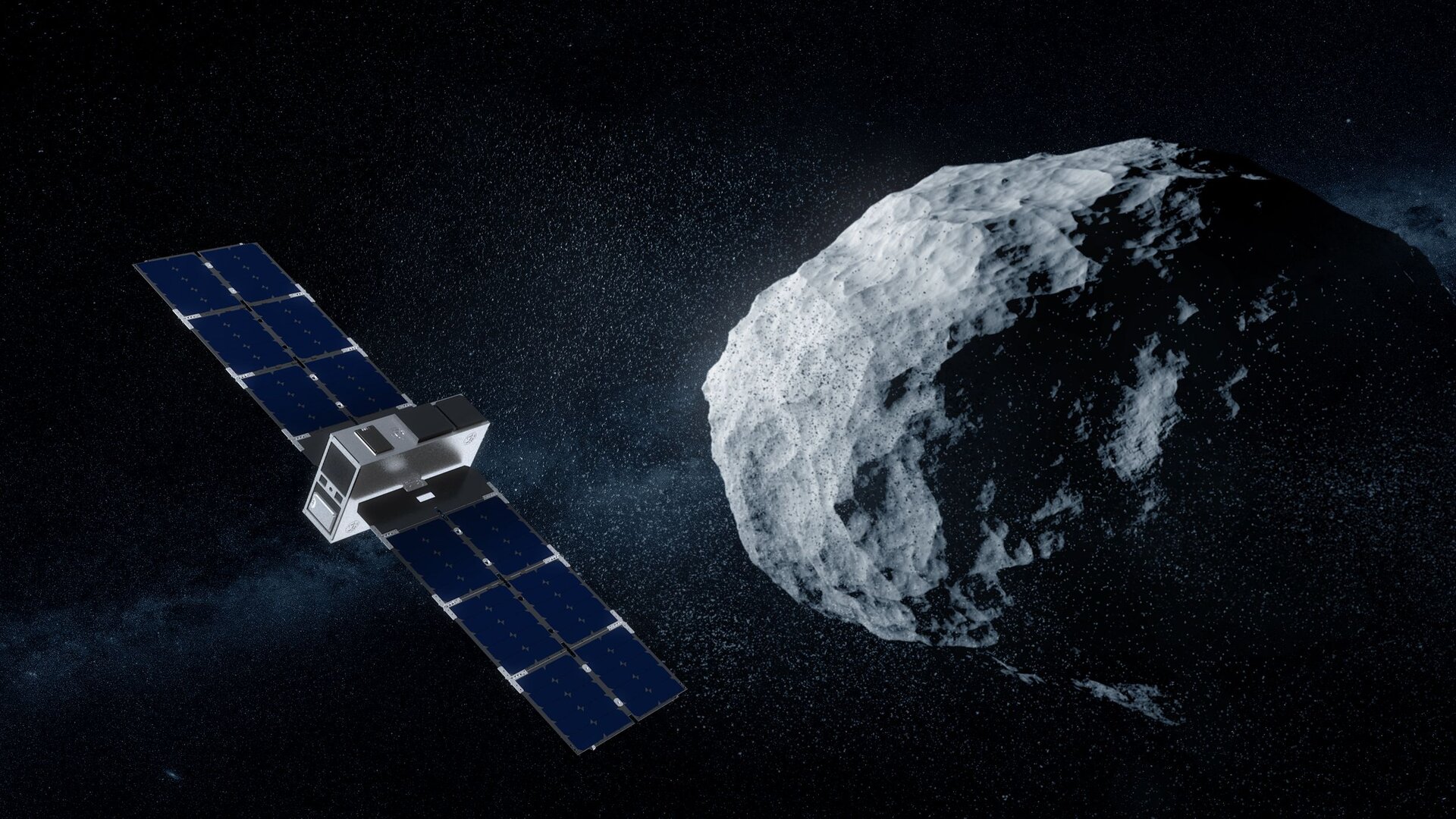 As ESA’s Hera mission reaches the Didymos double asteroid system, it will not be there alone: it will also serve as mothership for Europe’s first two ‘CubeSats’ into deep space. Juventas, performing subsurface radar sounding, is called after the daughter of Hera. The other, spectral surveyor Milani, takes the name of the researcher who began Europe’s asteroid risk monitoring system and came up with the original concept inspiring Hera and NASA’s DART – a double spacecraft mission for planetary defence.

Mathematican and astronomer Andrea Milani served as professor of mathematics at the University of Pisa until his untimely death in 2018. Andrea led the creation of the first automated system to compute the probabilities that an asteroid could impact the Earth in the future, the well known NEODyS service of the University of Pisa.

This led in turn to ESA’s creation of a centre to monitor Near Earth Objects, resulting in the NEO Coordination Centre based at the Agency’s ESRIN centre in Frascati, Italy.

“I knew Andrea well, and worked with him over the years on topics such as Pluto, and the dynamics of small bodies; he was an excellent scientist with a wide range of interests,” comments researcher Giovanni Valsecchi, retired from Italy’s National Institute for Astrophysics INAF.

“What spurred us to action in 1998 was the big splash surrounding an asteroid called 1997 XF 11, which was falsely reported in the media as being at risk of hitting Earth. Andrea got mad about that, because the claim was wrong.

“But what the incident made clear was that there was no systematic way of assessing an asteroid’s collision risk, so he decided to change that, with a system that automatically monitored the entire catalogue of Near Earth Objects (NEOs).”

Steve Chesley, then a post-doc student on a NATO fellowship, was recruited by Andrea to come to Pisa and work on what became NEODyS: “My first impression was that he was indignant about virtually everything, but he used that element of his personality almost as a tool to get things done; just look at his staggering list of papers. Once people got to know him well, he was like a big friendly teddy bear, and I learned so much working with him.”

“The project was an important one because while we had a pretty good asteroid search programme then, the pipeline was interrupted when it came to follow-up risk monitoring; there was no rigorous checking in place for protecting the Earth.”

The challenge for Andrea and his colleagues was to devise an automated system that could deliver useful results in a practical timeframe, because the key point about asteroid orbits is that they evolve over time, perturbed by the gravitational pull of the Sun, Earth and other planets.

“What we wanted to do was model the asteroids’ orbits for the next hundred years ahead,” explains Giovanni. “So what you have to do is define the limits of all the asteroid’s potential orbits in six-dimensional space, then do a ‘Monte Carlo simulation’ where points are checked at random. But the problem was that would take weeks, especially using 1990s-era computers.

“We needed to find a better strategy. So instead we represent those orbits most relevant to the risk of collision with a curved 1-dimensional line. It’s based on observations in the end, because of our ignorance of the real orbit of the asteroid. Then as follow-up observations are received through the Minor Planet Center the possible space taken up by the orbit becomes confined to a smaller and smaller region, and we can preclude collision – although beyond a certain point dynamical chaos will always make our predictions foggy. We can also flag those objects that require further observation by astronomers to shrink down their uncertainty.

“The important thing is this gave us a way of speeding up the ‘heartbeat’ of the system, so that when a new asteroid is discovered we can give within a few hours a first estimate of its risk of hitting Earth.”

Steve adds: “I compare this ‘line of variation’ representing an asteroid’s position uncertainty to a banana, thousands of times longer than it is wide, which is shrunk down to more like a wire by subsequent observations. With impact monitoring we highlight the parts of that wire could be cut by Earth.

“And we’re following these lines’ orbits into the future, so they end up looking like a messy bowl of spaghetti. That basic process is still being used, although some researchers are investigating new approaches.”

“Then when I went to NASA’s Jet Propulsion Laboratory, where I set up Sentry as a companion system, which uses substantially the same theory, although running on independent software. So NEODys became operational in 1999, and Sentry followed it in 2002.”

Giovanni recounts: “In the end NEODys was academic in nature, so we started lobbying Italian space agency ASI and ESA to set up an operational centre, which resulted in ESRIN’s NEOCC.”

Today the NEOCC records 26 079 asteroids and 113 comets, of which 1190 are on the ‘risk list’ – having a non-zero probability of hitting Earth – although many are moved out of this status as follow-on observations constrain their possible orbital paths.

Both the European and US systems go on improving their operational efficiency, to keep up with the steady increase in NEO discoveries, which has increased by a factor of ten up to nearly 3 000 per year. And with many new observatories due to come onstream, including the first of ESA’s own ‘Fly-Eye’ telescopes that number is sure to go on growing.

How to deflect an incoming asteroid?

But the whole point of assessing collision risk is not just for an academic exercise but to enable us do something if needed, and Andrea was active here too.

“The idea began with NASA’s Deep Impact, which crashed a washing-machine-sized spacecraft into comet Tempel-1,” says Giovanni. “It was not possible to measure the effect on the comet’s orbital motion, but Andrea worked with the Deimos Space company in Spain to ask: what would be the ideal mission to perform such a measurement?”

The result Andrea christened Don Quijote, from the title of the famous novel written by Cervantes. One spacecraft called Hidalgo – after the story’s brave, windmill-tilting knight – would crash into an asteroid while the other, Sanchez – for his cowardly retainer – would survey the effects of the collision.

Don Quijote was one of six asteroid mission proposals studied in detail by ESA’s ESA Near-Earth Object Mission Advisory Panel in 2004, and highlighted as a mission that could provide a vital missing link in the chain from asteroid threat identification to addressing that threat.

The problem was money. ESA could not afford to mount the entire double-spacecraft mission by itself. Instead it became international in scale: NASA will fly the Double Asteroid Redirect Test spacecraft later this year, to impact the smaller of the Didymos binary asteroids in 2022. Then ESA’s Hera will follow it in 2024, arriving two years later.

Unfortunately Andrea will not be able to watch this grand-scale cosmic experiment he conceived. He passed away suddenly from a heart attack on the way to visit a friend.

“He is sorely missed,” adds Steve. “He had a massive intellect, and a sense of fun. I think he’d be very pleased to have a spacecraft named after him.”

Giovanni agrees: “Andrea had an asteroid named after him, 4701 Milani in the main Asteroid Belt, but I can imagine him thinking lots of scientists have asteroids named after them, very few get a space mission!”

The Incredible Adventures of the Hera mission – presenting Hera