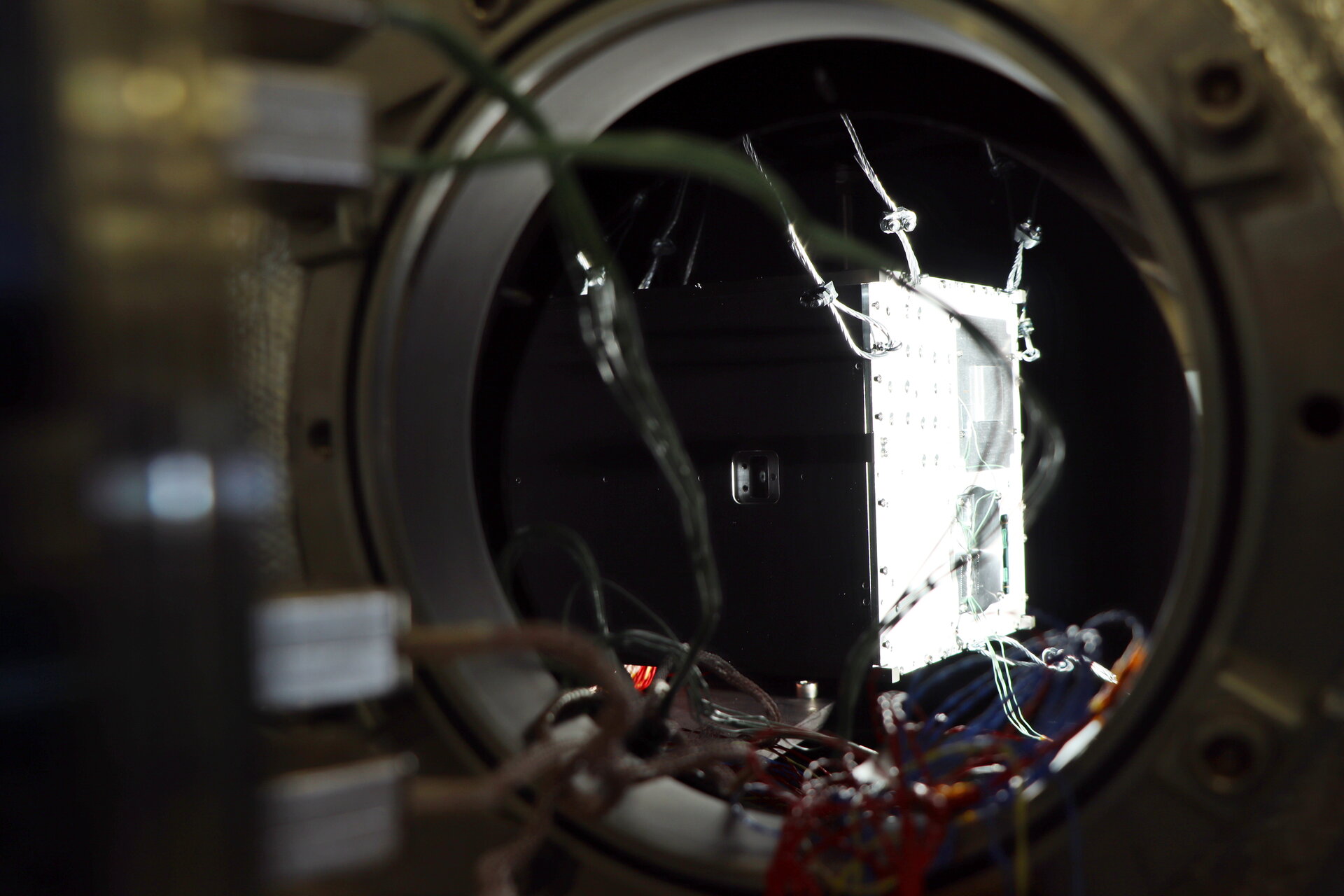 A test version of ESA’s Proba-V Companion CubeSat seen during preparation for ‘thermal balance’ testing in the Agency’s Mechanical Systems Laboratory at its ESTEC technical centre in the Netherlands.

Space is a place where it is possible to be hot and cold at the same time, if one part of your satellite is in sunlight and another face in shade. A satellite’s interior needs to maintain a steady temperature to go on operating properly.

Accordingly this ‘structural and thermal model’ of the Proba-V Companion CubeSat was placed inside the Large Vacuum Facility of ESA’s Mechanical Systems Laboratory – employed to test large satellite systems or complete small satellites – for a week-long exposure to temperature extremes in space-quality vacuum.

Developed by prime contractor Aerospacelab in Belgium for ESA, this mission is a 12-unit ‘CubeSat’ – a small, low-cost satellite built up from standardised 10-cm boxes. It will fly a cut-down version of the vegetation-monitoring instrument aboard the Earth-observing Proba-V to perform experimental combined observations with its predecessor.

Launched in 2013, Proba-V was an innovative ‘gap filler’ mission between the Vegetation instruments monitoring global plant growth aboard the full-size Spot-4 and -5 satellites and compatible imagery coming from Copernicus Sentinel-3, the first of which flew in 2016.

By combining the views from three adjacent telescopes into one, Proba-V’s Vegetation achieved a continent-spanning swath of 2250 km, allowing to image the entire world’s plant growth in just over a day. But with its operational mission now over, Proba-V has shifted to experimental mode.

As part of that effort, the Proba-V Companion CubeSat will host a single telescope version of the Vegetation imager, left over from Proba-V development. The two missions will perform joint observations, to evaluate how well the instrument performs on a smaller, lower-cost platform.

Aerospacelab will also gain operational experience to be applied to its planned constellation of geospatial-information-gathering small satellites.

The flight version of the nanosatellite will undergo its own thermal balance testing at ESTEC later this year, while its instrument is due to be calibrated in the establishment’s Opto-Electronics Laboratory and its platform will be de-magnetised using ESTEC’s Magnetic Coil Facility. The Proba-V Companion CubeSat’s antenna underwent radio-frequency testing in January.

The mission is supported through the Fly in-orbit testing element of ESA’s General Support Technology Programme.