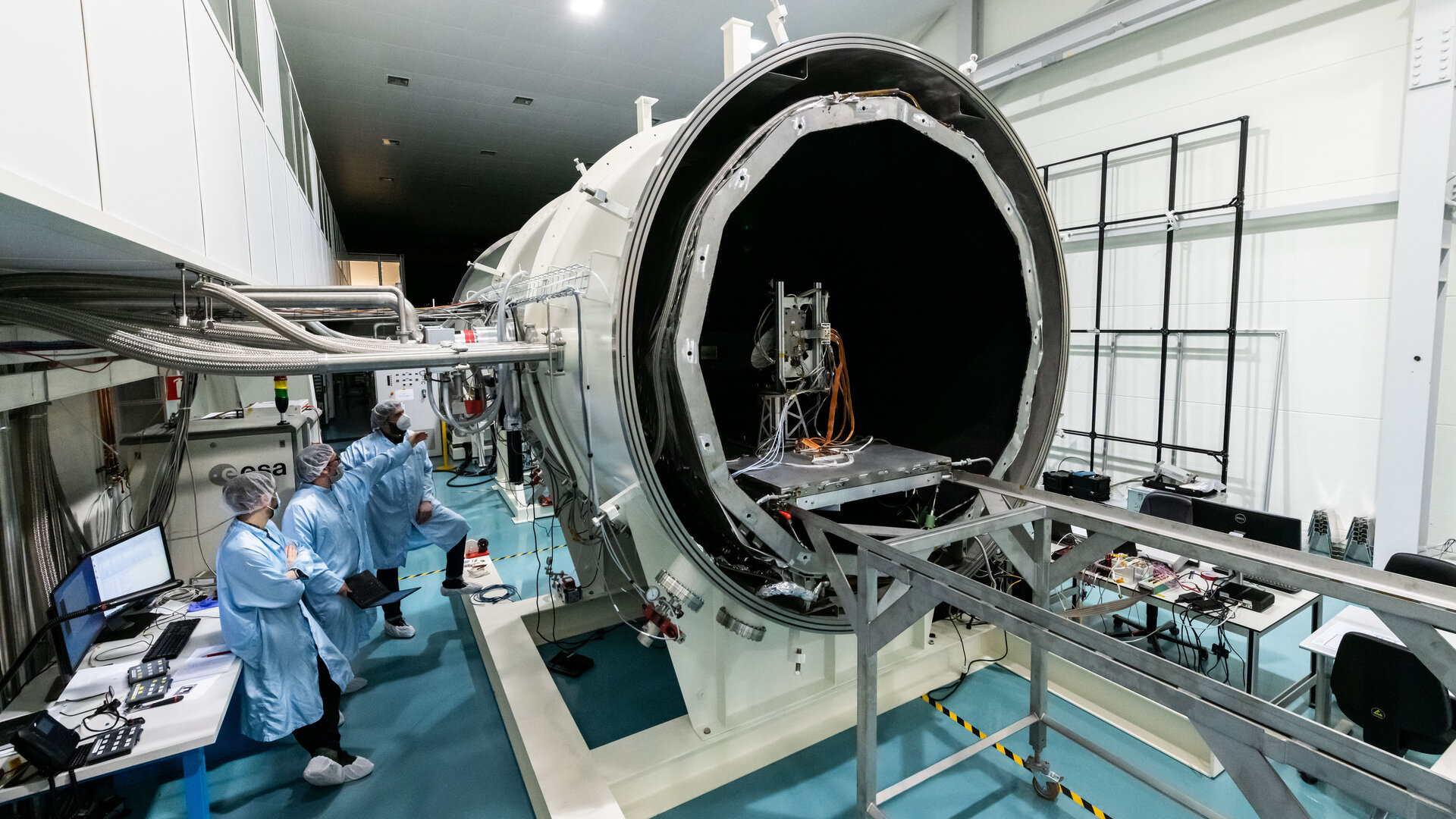 ESA’s newest radio-frequency test facility allows direct measurement of antenna systems in the very vacuum conditions and thermal extremes they will work in, including the chill of deep space. It will soon be put to work testing the Juice mission’s radiometer – destined to probe the thin atmospheres of Jupiter’s largest moons.

The recently completed facility is called the Low-temperature Near-field Terahertz Chamber , or Lorentz. Based at ESTEC in the Netherlands, it can test high-frequency RF systems such as stand-alone antennas and complete radiometers at between 50 to 1250 Gigahertz in space-quality vacuum for several days on end, in temperature from just 90 degrees above absolute zero up to 120 °C.

“There is nothing else like this in the world,” says ESA antenna engineer Luis Rolo. “It enables a whole new capability in RF antenna testing.

“The reason we need it is because key RF variables such as focal length and precision alignment are influenced by materials shrinking with cold or swelling with heat. Accordingly standard room-temperature testing is not representative in such conditions – to all intents and purpose they almost become like different instruments. This became obvious as long ago as the 2009 Planck mission, which operated at cryogenic temperatures to pick up microwave traces of the Big Bang.”

ESA antenna engineer Paul Moseley adds: “But while the need for such a facility is clear, designing, building and finishing Lorentz has proved extremely challenging. This is because while one side of the chamber reaches very high or low temperatures, the other side must stay at room temperature. The scanner acquiring RF signal power and field patterns has to be kept at steady environmental conditions to ensure reliable, cross-comparable data.”

“This is such a multi-disciplinary project, with so many new elements to us, as antenna engineers,” adds Luis “Throughout the installation and commissioning phases we had a remarkable support from people that have been working with cryo-chambers and complex mechanical systems for many years, such as the ESA and European Test Services thermal vacuum teams and of course ESTEC’s Electro-Mechanical workshop. Their support was very valuable and greatly appreciated.”

The facility is based around a 2.8-m diameter stainless steel vacuum chamber. Operating in vacuum meant the familiar spiky foam wall linings usually used to dampen reflected signals in RF test chambers had to be replaced due to the risk of ‘outgassing’ contaminants. Instead black carbon epoxy incorporating silicon carbide grains absorbs and scatter signals.

Liquid nitrogen can be pumped into the inner lining of the vacuum chamber to chill it, or alternately gaseous nitrogen to push up the temperature, typically targetting a steady ‘plateau’ for test purposes.

The test item itself can be rotated during testing as the scanner – its position controllable down to a few thousandths of a millimetre – records its signal from the other side of the chamber’s thermal barrier. Kept insulated by multi-layer insulation and an air gap, this thermal barrier is capable of moving to let the mobile scanner peep through, attaining a 70×70 cm field of view.

In May Lorentz will assess its first flight item: the Sub-millimetre Wave Imager radiometer of ESA’s Juice mission, which will survey the scanty atmospheres of Jupiter’s Galilean moons and their interaction with the Jovian atmosphere and magnetic field.