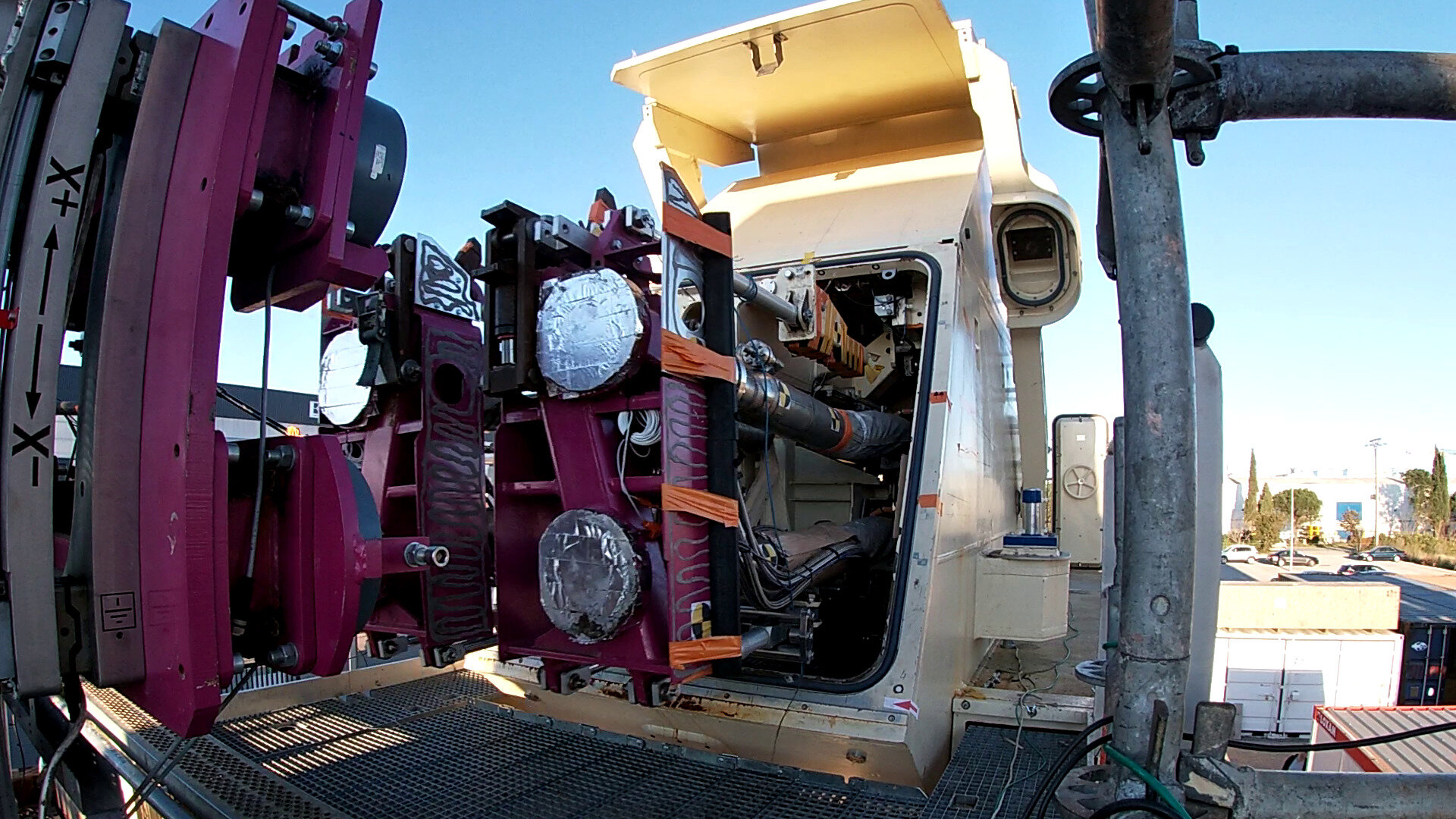 Ariane 6 early combined tests at Latesys in Fos-sur-Mer, in France, have simulated the moment of liftoff when the umbilicals separate from the launch vehicle.

These tests are part of the critical path towards the first flight of Europe’s new Ariane 6 launch vehicle. They validate the interfaces and mechanical behaviour during separation of this complex cryogenic connection system. More extensive combined tests will be carried out at Europe’s Spaceport in Kourou, French Guiana which will include the fluidic supplies.

The cryogenic connection system sustains the launch vehicle on the launch pad during the countdown to launch.

Umbilicals supported by ‘cryo-arms’ on the main mast, supply Ariane 6 with top-up fuel, maintain the correct pressurisation of Ariane 6’s tanks, cool the engines before ignition and generally keep the launch vehicle in an optimal condition right up to the point of liftoff. The same umbilicals allow the fuel to be drained safely if a launch is aborted.

“At the moment of liftoff, it is paramount that the connections between launch vehicle and launch base are disconnected and pulled away quickly and safely,” explained Luis Escudero, ESA’s Core Future Launch Preparation Programme Manager.

“Pyrotechnic actuators detonate to burst hinges open allowing the umbilicals to safely separate from Ariane 6. The supporting cryo-arms that hold the upper umbilicals then move out horizontally away from the launch vehicle. A 50-tonne counterweight inside the mast – as heavy as a humpback whale – speeds up this manoeuvre.

“At the same time, steel doors slam shut on the mini-masts at the base of Ariane 6 on the launch pad to shield the connectors from the rocket exhaust.

“This all happens in split seconds in a highly precise, synchronised sequence.”

The launch base design is improved for Ariane 6. The disconnect time is now faster than it is for Ariane 5. This means the sequence can be triggered at the latest possible moment in the countdown reducing the chance of unnecessary disconnects on an aborted launch.

Over the last few months, Latesys under CNES responsibility and with the support of ArianeGroup, have performed tests to validate the disconnection and retraction functions of the launch pad mechanical systems and the mounts between launch base and rocket, and verified mechanical loads.

These tests involved the cryo-arms which connect to the Ariane 6 upper stage; mini-masts fixed to the launch table connected by umbilicals to the lower stage; and other Ariane 6 connections.

ESA has overseen these tests and analysed the results to verify and validate the cryogenic connection system.

Following these tests, the components were dismantled and will be shipped to Kourou for integration on the launch pad. Here they will be reassembled and further tested in combination with the cryogenic systems that will supply liquid oxygen and liquid hydrogen to the launch vehicle.

“These tests were a vital link in a chain of test campaigns that move us forward to further combined tests in French Guiana. This is a very positive step forward for Ariane 6,” commented Pier Domenico Resta, ESA’s Ariane 6 Launch System Engineering Manager.