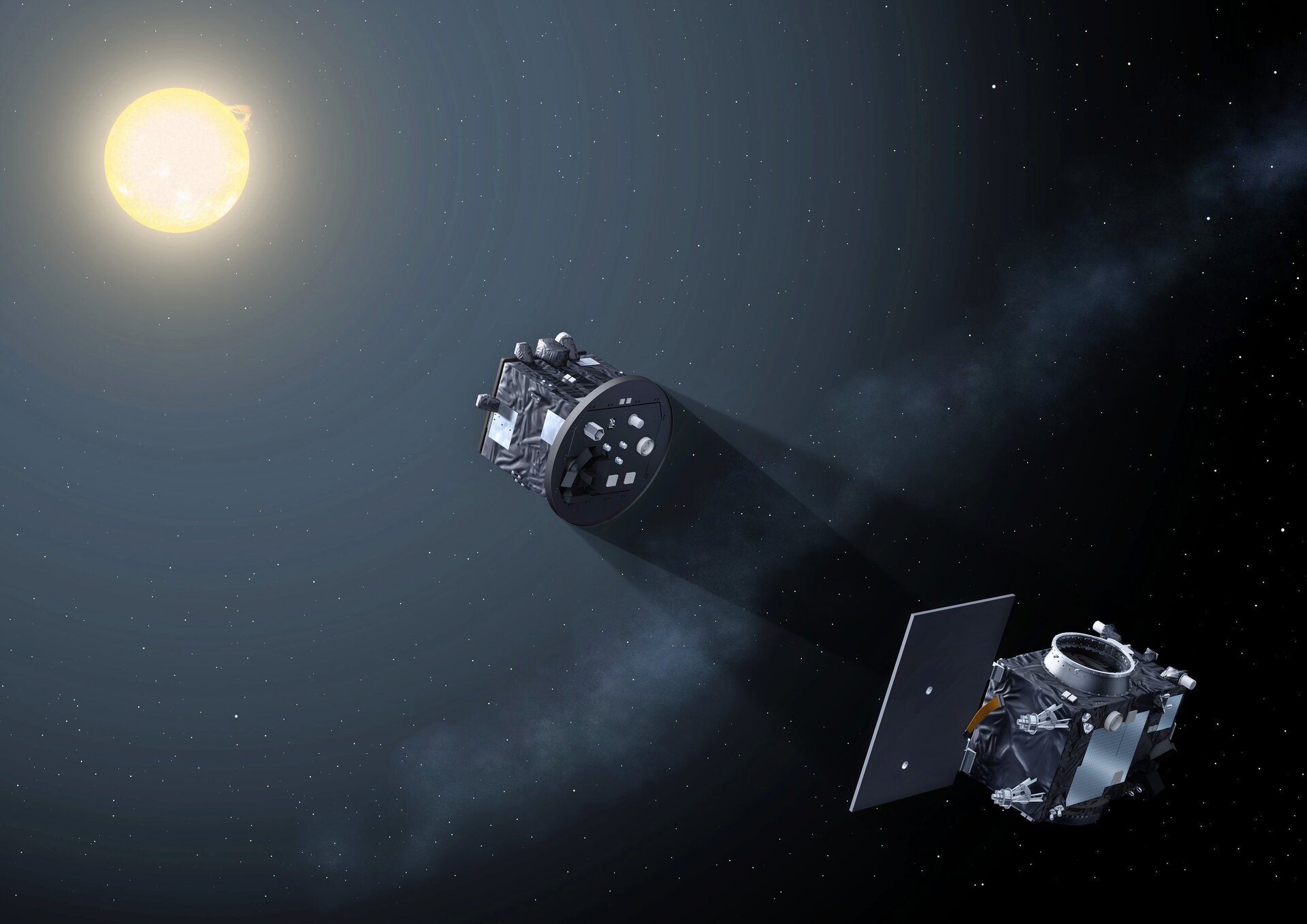 The longest corridor in ESA’s largest establishment was turned into a test site for one of the Agency’s most ambitious future missions, Proba-3. The two satellites making up this mission will line up so that one casts a shadow onto the other, revealing inner regions of the Sun’s ghostly atmosphere. But such precision formation flying will only be possible through a vision-based sensor system allowing one satellite to lock onto the other.

The Proba-3 pair will fly at a nominal 144 m apart for coronal observations, while in addition performing formation reconfiguration manoeuvres that will change their distance all the way down to 25 m, and up to 250 m.

Testing of this sensor system to make this possible took place at ESA’s ESTEC technical centre in Noordwijk, the Netherlands, using its 230-m-long main corridor, which links project offices with technical laboratories and the establishment’s satellite Test Centre.

Lights were dimmed and exhibits removed to allow test-versions of the cameras to observe a flight-like target bearing LED displays down the entire length of the corridor.

“This vision-based sensor system is the initial way that the two satellites acquire formation, and re-acquire it once per orbit,” explains Damien Galano, ESA’s Proba-3 project manager.

“It is designed to allow the pair to find each other and estimate their relative position down to a few millimetres’ precision, across distances of 20 to 250 m, allowing the spacecraft to autonomously manoeuvre into formation. So we needed a long space to test it, and an indoor space such as this is much more controllable than outdoors, where wind and other disturbances would interfere with the setup.”

Planned for launch in 2023, Proba-3’s two metre-scale satellites will line up in such a way that one – the ‘Occulter’ – blocks the blinding solar disk for the other ‘Coronagraph’. This will give researchers a sustained view of inner layers of its faint atmosphere, or ‘corona’, normally hidden in intense sunlight – except during brief solar eclipses.

“Actively flying in formation throughout this orbit would be impractical. Instead the satellites only fly in formation for the six hours around the 60 000 km altitude top – or ‘apogee’ – of their orbit. The rest of the time they are manoeuvred into a free flying relative trajectory which ensures the safety of the mission. Then, coming out of the bottom of their orbit – or ‘perigee’ – they must reacquire one another.”

A set of cameras will be aboard the Occulter satellite, looking out for pulsing LEDs on the Coronagraph – one in each corner plus a smaller square pattern on the right hand side, intended to reveal the satellite orientation and enable proximity operations.

Raphael adds: “Two cameras with different fields of view are needed. The first camera has a wide 15 degree field of view, used to find the Coronagraph. The second has a narrower field of view to provide the necessary millimetre-scale accuracy. Another sensor allows the synchronising of their image acquisitions with the LED pulses. Such precise synchronisation – down to a matter of 10 millionths of a second – is necessary because the light from the LEDs might otherwise be lost in the Sun’s spurious reflection on  the Coronagraph, or in the bright Earth in the background. In addition, the cameras will also have a filter optimised for the near-infrared LED light.”

Testing of the camera system and a square metre LED-bearing target was spaced out at 30 m intervals along the length of the corridor, yielding promising results. In order to simulate solar stray light, a specific lamp with the correct spectral properties was used. This lamp was specially characterised by ESTEC’s Optics Laboratory for this test.

As a follow-up, a smaller version of the LED target was mounted on a rail-mounted robotic arm in ESTEC’s Guidance Navigation and Control Rendezvous, Approach and Landing Simulator, or GRALS. This 33-m long facility is used to simulate close approaches, rendezvous and docking between space objects.

Jonathan Grzymisch, Proba-3 Guidance Navigation and Control system engineer, explains: “The robotic arm moved the LED target along a pre-programmed pattern as the cameras watched, allowing the instrument software to calculate its relative dynamic trajectory continuously. This allows us to characterise the sensor performance on a deterministic dynamic basis. Both tests performed well, thanks to the cooperation of ESTEC’s Facility Management and the relevant technical sections.”

Proba-3’s vision-based sensor system has been developed by the Technical University of Denmark (DTU). The team could not be present in person at ESTEC due to COVID-19 restrictions, but supported the testing remotely while ESA engineers prepared and ran the test.

Proba-3: Dancing with the stars