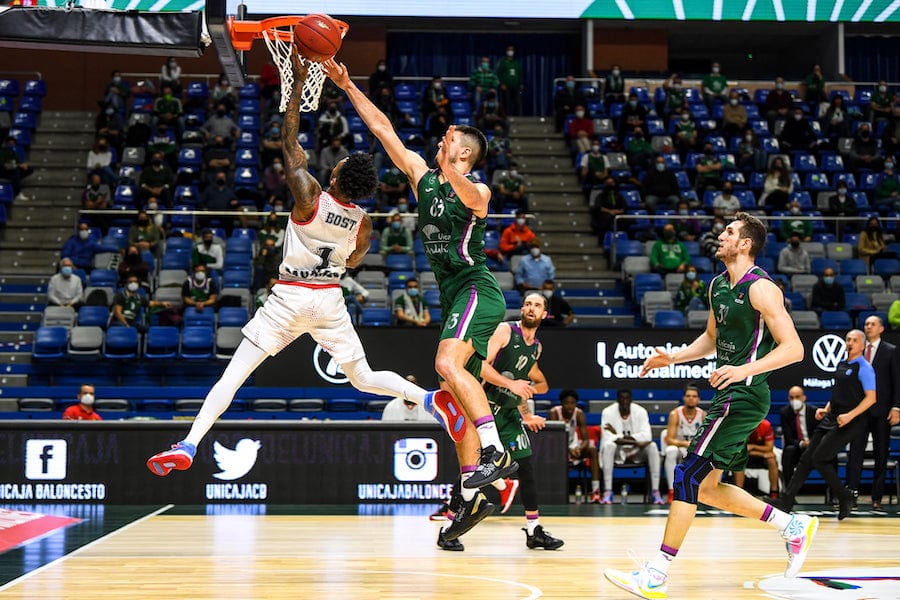 AS Monaco Basketball have already secured their spot in the Euro Cup 7 Top 16, but that didn’t stop them going for it against Unicaja Malaga on Tuesday night, when they beat the Spanish team 98 to 89.

The Roca boys already had their Sweet 16 spot clinched when they went on the road to play Unicaja Malaga at the Palacio de Deportes. The 12,000-seat stadium had a bit of life with some 400 spectators allowed to attend, giving slow but steady signals that life is returning to a bit of normalcy.

AS Monaco had a fantastic start to the match and quickly dominated the scoring, especially Mathias Lessort, who was seemingly everywhere at once.

Just before the quarter hour mark, Unicaja seriously stepped up their game with Yannick Nzosa and Francisco Alonso going mad with three-pointers, evening up the score. Monaco found a three-point master of their own to retaliate in the form of Captain Dee Bost, but until halftime it was a battle between two teams who were “en fuego”, and Unicaja had the lead going into the locker room, 48 to 55.

After the halftime break, Monaco fought back hard to regain control. It wasn’t until the fourth quarter that they managed to even up the game and, after a Damien Inglis three-pointer, they never looked back. Unicaja continued to fight hard, but they never took back the lead after this. The game ended in a 98-89 victory for the Roca team as they head to the quarterfinals.

Monaco made 28 out 46 shots with an amazing nine for 13 in the three point range. They had 31 rebounds, with 11 by Lessort alone, 13 assists and six steals.

Dee Bost and Lessort were tied for Roca high scorers with 21 points each, followed closely by Damien Inglis who had 16.

“I think we played well from the start in this Euro Cup and we deserve the first place,” said assistant head Coach Mirko Ocokoljic, who was standing in for Zvezdan Mitrovic. “When we saw the group, the teams that made it up, we said to ourselves that it would not be an easy mission. The team knew how to mobilise. From now on, we will prepare for this quarter-final.”

Monaco Basketball returns on 12th March for another away game against ESSM Le Portel Côte d’Opale in a Jeep Elite match starting at 6pm.